STM32World is a series of development boards designed for rapid development and prototyping.

The idea is to have MCU boards available with multiple MCU's (possibly including non ST ones such as the ones from GigaDevice).

The boards will be stackable but rather than trying to cram every single imaginable peripheral device into every board, these will be deliberately kept simple. A CAN transceiver board will include a CAN transceiver and nothing else.

As much as possible, peripheral board will be designed in such a way that they will not conflict with each other, even though this might not be possible to achieve 100 %.

There are a gazillion STM32 development boards available on the market. A very reasonable question would be: "Why create another one?"

The problem with the simple boards is that you have a very limited selection of MCUs and you end up with a ratnest of jumper wires.

The problem with the complex boards is that they are too opinionated. I have a STM32F405 based discovery board and that one includes a complex audio part, which I have never needed nor used.

STM32World boards are meant to be stackable.

All boards are 3" x 2". In many cases this is much bigger than needed but PCB's are cheap and having the boards at that size makes layout much easier. 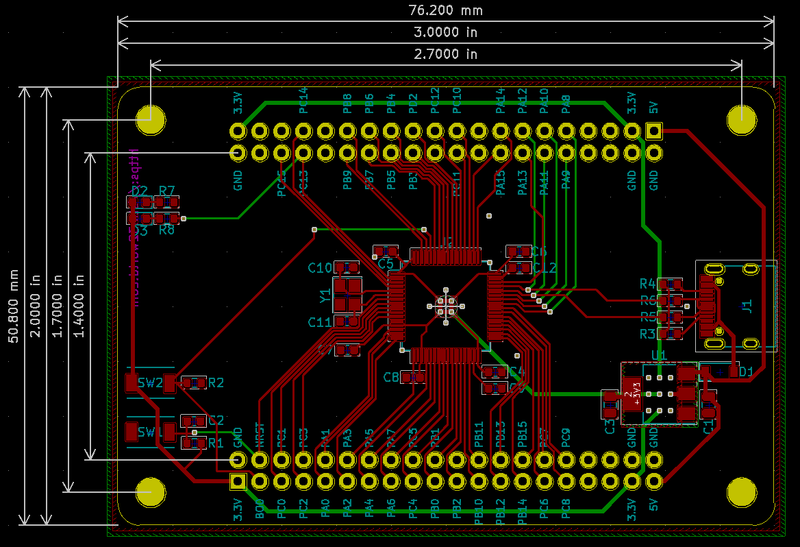 The STM32 processors are not 100 % flexible in mapping I/O pins, so certain peripherals can only be mapped to certain pins. Because of that, some of our board will conflict with each other.