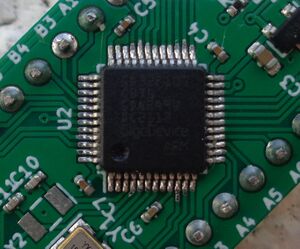 STM32 processors are getting really hard to get (and expensive) so I thought it was about time to look into some of the alternatives.

GigaDevice make a series of processors GD32 which closely resemble the STM32 ones. It should be noted however, that due to the shortage of STM32 MCUs, the GD equivalents are also getting hard to come by even though they are cheaper. At the time of buying these they were listed at $6 each, while the real STM32F103CB was $26 and pretty much made out of Unobtainium.

The board is identical with the Green Pill board with the STM32F103 replaced with a GD32F103CBT6.

I put this test on github here