When learning a new programming language, programmers often, if not always, begin with a humble "hello world" application, which will print "Hello World!" on the display. As common as that, when it comes to embedded programming (where a display might not be available), a typical "first application" is one which will blink a led. And for this reason, most development boards comes with one or more leds which can be controlled with a GPIO pin.

In this article, I will be using my own Green Pill development board, which for all intents and purposes is comparable to the common Blue Pill. The board is based on an STM32F103 processor, includes a 8 MHz external crystal and has got a led attached to the PC13 GPIO pin.

Using the STM32 HAL from ST there are a number of different ways to blink a LED. These are discussed in the following sections.

For these examples, I will be using ST's Stm32CubeIde, which includes Stm32CubeMx. Stm32CubeMx is used to "configure" the processor.

When starting a new project in Stm32CubeIde, I generally go through some common settings. First step I configure the Serial Wire debug (including the trace):

Second step is to configure the CPU to enable the external crystal: 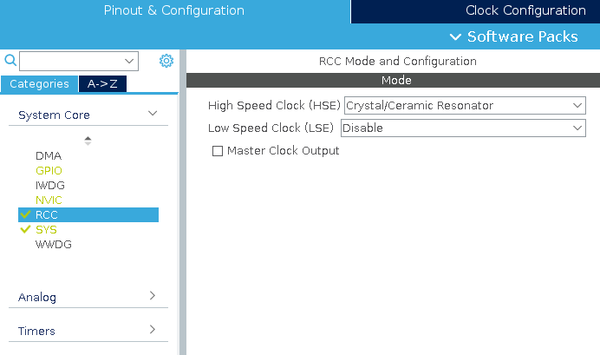 Final step is to configure the various clocks:

This approach, while quite misguided, is often seen in examples, particularly Arduino based ones. In this approach, the led is simply toggled in the main loop of the program, with an appropriate delay. Using Stm32CubeIde and it's HAL libraries, the main loop will look something like:

The approach is simple and easily understood. It will toggle the led, not caring what the previous state was, and then wait for 500 ms. The result will be approximately 1 blinks per second:

The keyword in the above description is "approximately". I made the claim earlier that this approach was generally misguided and that is part of the problem. In reality, this approach has at least two problems.

First of all, the call of both HAL_GPIO_TogglePin and HAL_Delay are not single instructions, so the actual time spend in the loop will be "a tiny bit" longer than 500 ms resulting in a frequency which is slightly below the intended 1 Hz. Sure, it will only be "off" by a few micro seconds, but it will be off!

The second problem is the "HAL_Delay". While that is running, the processor is tied up in doing "nothing". While doing nothing but flashing a led that is of course OK, but typically one would want the processor to do "other things" and if that is the case the actual LED frequency will be even more unpredictable.

You can find this example here: https://github.com/lbthomsen/greenpill/tree/master/blink1.

A somewhat better approach would be to check the time in the main loop - something like this:

Compared to the previous example, this one is still running in the main loop, but without a forced delay. Instead of the delay, this version will check the "HAL_GetTick()". If no long tasks are being run which may block the main loop and the exact timing of the LED is not overly critical, this approach is perfectly acceptable.

When starting a new project I quite often include above snippet. It gives me an instant visual check if my code is still running. Any code which causes a fault will halt the blinking.

You can find this example here: https://github.com/lbthomsen/greenpill/tree/master/blink2

While the previous example is much better than the first, there's still room for improvement and that improvement will come from using one of the STM32F103 timers.

A third approach to blinking a led is to use one of the built-in timers of the CPU.

First step is to use STM32CubeMX to configure the timer. Begin by enabling a clock source: 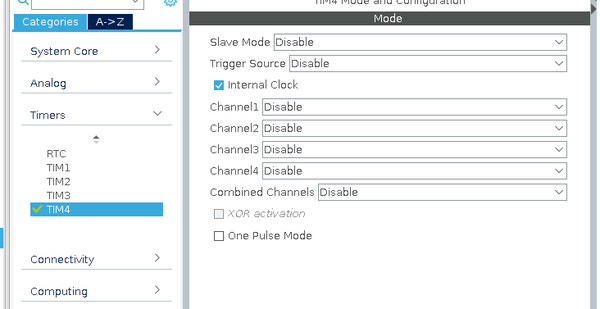 Enabling the Internal Clock means the timer will be run by the ADB1 clock, which was configured earlier to run at 72 MHz.

We next need to divide this down to a usable frequency. We define two User Constants 'T4_PRE' and 'T4_CNT': 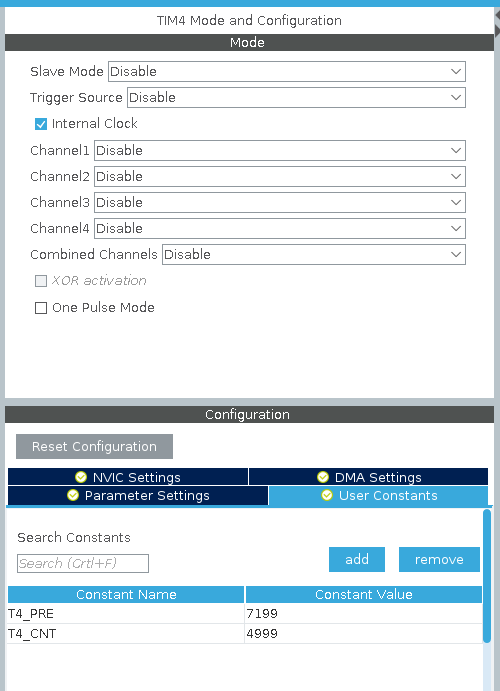 Switch to the Parameter Settings tab and use the above constants in place of Prescaler and Counter: 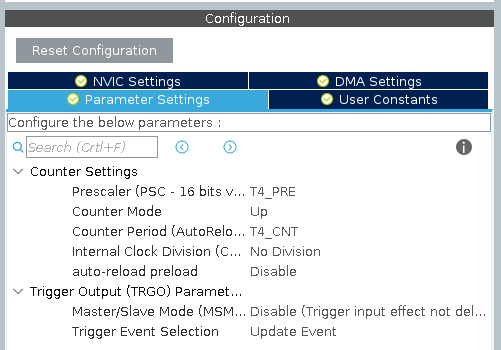 The final step is to enable the Global Interrupt for this timer:

We can now generate code and finish the last few things.

First - while the User Constants are defined in the header file, I like to put them directly in the source like this:

We now need to define the Interrupt callback:

This function will be called every time the counter reach the end - which in our case will be once every 500 ms.

And the final step is to start the timer:

That is it - notice that the while loop is completely empty. Contrary to the two previous examples this one will run at a precise frequency controlled by the timer.

You can find this example here: https://github.com/lbthomsen/greenpill/tree/master/blink3

In the previous example, the actual timing of the blink was offloaded to a hardware timer. The actual toggling of the LED was still handled in the main processor by an Interrupt Service Routine (ISR). The ISR doesn't do much more than toggling a GPIO so it will be really quick. However,

The final approach to blinking a LED would be to use PWM (Pulse-width modulation). Unfortunately, the PC13 GPIO port used in the previous examples, is not able to do hardware PWM, so in order to demonstrate this approach, the built-in LED must be hooked up to a GPIO which allow PWM (we'll be using PB6 in this example). By default, PC13 will be in "input" mode (high impedance), so it is a simple matter of running a jumper wire from PC13 to PB6:

The next step will be to use STM32CubeMX to reconfigure the timer and GPIO pins. 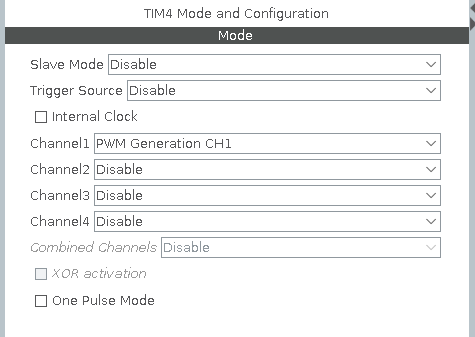 Also remember to reset the PC13 as we want to keep that in high impedance input mode. 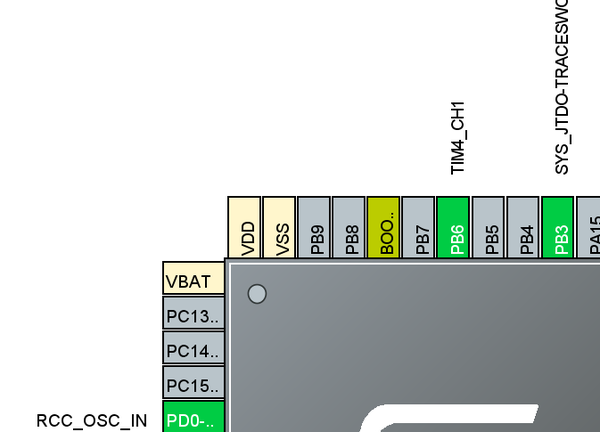 Finally, we need to add an extra "constant" for the PWM duty cycle:

and use that constant as the actual duty cycle: 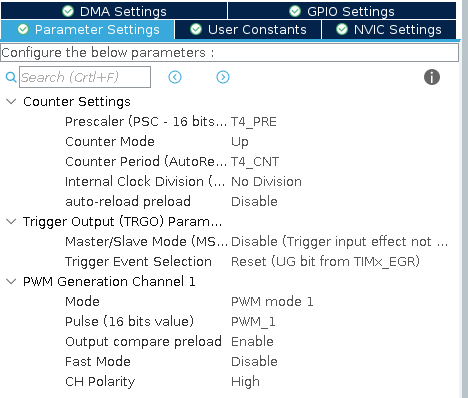 We are now done with the configuration in Stm32CubeMX and we can generate the code.

In main.c, first we set the constants:

It is now a simple matter of starting the timer in PWM mode:

And that is about it - not a single CPU cycle is "wasted" on flashing the LED. It runs entirely in the peripheral hardware.

You can find this example here: https://github.com/lbthomsen/greenpill/tree/master/blink4

The examples in the previous section all used ST's HAL (Hardware Abstraction) Library. These libraries are quite complex and they do take a lot of memory. The HAL library is build on top of some more hardware specific low level libraries known as LL. Fortunately, even with STM32CubeMX, it is possible to avoid the HAL library and stick exclusively with the low level.

Like the earlier HAL examples, the starting point of the LL examples is STM32CubeMX. This time however, we switch the library from HAL to LL:

In principle this works almost exactly like the HAL example. The main difference is that we need to do a bit of housekeeping to maintain the counter.

First step is to enable the systick interrupt.

The interrupt handler is already defined in `stm32f4xx_it.c`. We just add a counter:

Finally we create a helper function to get this variable. In `stm32f4xx_it.h`

We now, like when using HAL, got a systick counter which increments every 1ms and our main program loop can be implemented like this:

You can find this example here: https://github.com/lbthomsen/blackpill/tree/master/ll_blink1

Like in the previous example Using a timer, a periodic timer interrupt can be used to toggle the LED on and off.

First, configure the TIM4 exactly like in the previous example, but ensure the advanced config is switched to LL rather than HAL.

While HAL provides a functioning interrupt handler, LL just provide an empty function, so first step is to modify this in `stm32f4xx_it.c`:

Essentially we just need to clear the flag so that the MCU know we have handled the interrupt.

In `main.c` we create our callback function:

Now we can start the counter and enable the interrupt:

And that is it - the LED is happily flashing once per second.

You can find this example here: https://github.com/lbthomsen/blackpill/tree/master/ll_blink2