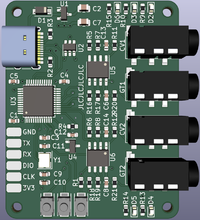 MIDItio is a planned USB Midi to CV device. The device will act as a USB MIDI device connected to a USB host. It will be able to run two channels simultaneously with a CV indicating the pitch and a Gate indicating start and stop.

The name MIDItio is derived from MIDI and the Latin "ditio" which means "control".

The MIDItio device has got two analog outputs (CV) and two digital outputs (gate). It can be configured to run in two different "modes":

When operating in two channel mode, the velocity is ignored.

The primary concerns dictating the choice of MCU are:

Without a boost regulator the highest available voltage on the board is the USB VBUS 5V. That means the output amplifier for the CV's need to map 0-3.3V into 0-5V.

The amplification of a non-inverting opamp is:

The output amplifier will add a certain DC error (due to tolerances on the resistors) and we'll need a way to calibrate the device. In our case we simply feed the amplified output back to an ADC. The input pins on STM32 are 5V tolerant when in digital mode, but when set to analogue they are not! So some care should be taken not to set the value higher than 3.3 V while calibrating.

First prototype was ordered and this is how they turned out:

After receiving the rev. a prototype a few things became immediately obvious. First of all, the stm32l151 USB is gadget/device only and thus do not have a built-in pull up on the D+ line. Second, the stm32l151 does not have DFU support in it's built-in bootloader.

The first was easily tested with a bodge resistor: 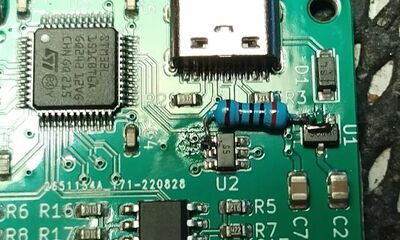 Based on the testing a few changes was made for revision b.

The pin assignment is pretty straight forward, largely dictated by the analog pins and how they are wired together in the schematics. 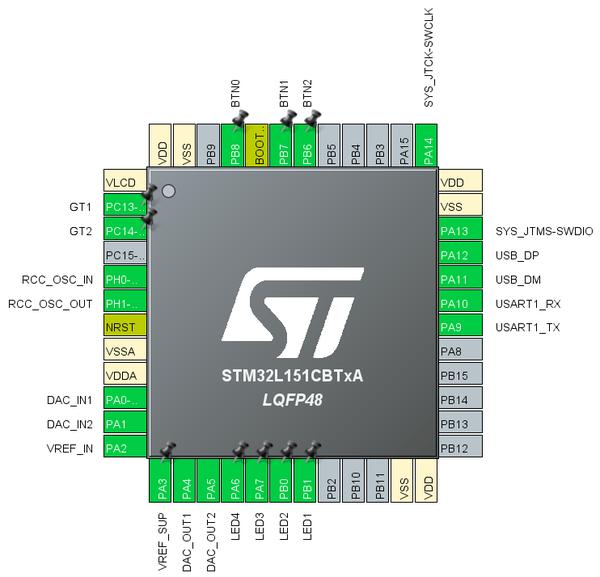