When developing the STM32Dev board a WS2812B RGB LED was including connected to the PC6 GPIO.

The WS2812B LED contains 3 LEDS: red, green and blue and each of these LEDS can be set at 256 different brightness levels. These levels are controlled with a bit stream running at 800 kHz and multiple LEDS (up to 1000-ish) can be chained after each other.

Searching the Internet there are a lot of suggestions and implementations dealing with the ws2812 LEDs, so obviously I decided to take a different approach. This approach is described on this page.

When sending data each LED need 24 bit - 8 bit for each color. The first LED in the chain will "use" the first 24 bit and then pass any following bit to the next LED in the chain and so forth. After a reset (a pause with no data) this cycle repeats.

For each individual LED the 24 bits are expected like this:

Each bit is send as one pulse. The difference between high and low time indicates if the bit is set or reset: 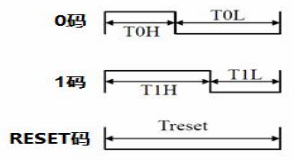 The bits are send at a frequency of 800 kHz (800000 bits per second) so each bit in total takes 1.25 μs. The early WS2812s were really timing critical but the later models are a lot less critical. Official timing for the WS2812B is:

There are a number of ways, driving a string of WS2812's could potentially be implemented on STM32 MCU's. One of the better approaches I have seen involve using the MOSI signal of SPI to drive the LEDs (while ignoring the SCK).

The library is available on Github: