All STM32 MCUs has a builtin bootloader stored in so-called system memory. The system memory is a ROM (read-only memory) which is created during the production of the MCU and can never be changed (it can however be disabled - see Read Out Protection). When the MCU startup the Boot0 pin is asserted and if high (pulled up to VCC) the MCU will execute the bootloader.

The "problem" (or challenge)

But what if we would like to execute this bootloader programmatically based on some other event for example the press of a user button or a command in a serial console. While this is entirely possible it is surprisingly difficult. The problem is that the built-in bootloader make a lot of assumptions and it is necessary to make certain all these assumptions are met before jumping to it. In general that would look something like:

Depending on which peripherals is being used, the above can be quite complicated and changes in code can easily screw this up.

Fortunately, there is in fact an easier way to do this. If we look at the code generated by STM32CubeMX the startup is like this:

By the time the main function is being called, only the memory has been initialized (BSS has been set to 0x00 throughout), and if we were to do the jump immediately (in the USER CODE BEGIN 1 section) that would work just fine. That would look something like this:

Of course the result of that would be an application that always executed the bootloader, and that is not really useful, nor is it what we wanted to do.

What we need is a way to store a flag, which will survive a system restart of the MCU. This is a little bit tricky since the user memory (RSS) is set to zero during restart. There are multiple examples online of how to store variables/flags which will survive a processor reset. A common approach is to use the user registers of the Real Time Clock (RTC), however this approach is quite complicated (require the RTC to be initialized) and it is quite hard to make it generic for all STM32s since the RTC differs quite a lot between the STM32 variants.

Fortunately there's a hack which can be utilized here. If we look at the memory (RAM) of a typical STM32 application it looks something like: 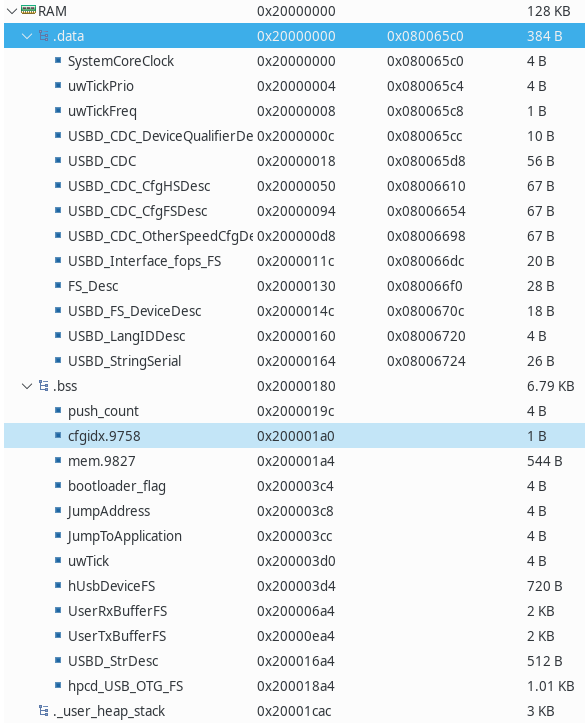 The DATA and RSS are being reset during restart, but everything above that (heap + stack) are being left alone. Not only is it being left alone, but we got variables from the linker which tells us exactly where they are independent of the actual MCU. Looking at a typical linker script (generated by STM32CubeMX we will find the following:

In other word, the _estack points to the highest memory location (the stack grows down, while the heap grows up).

Of course under "normal" circumstances one shouldn't mess with the stack, but in our case immediately after messing with it we perform a system reset, so we can afford to lose whatever is stored somewhere in the stack. If we debug the application the MCU registers contain the following at the start of the main function: 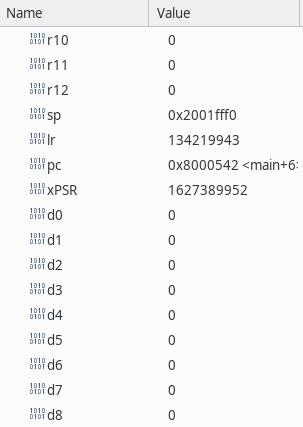 The interesting register here is the stack pointer SP which contains 0x2001fff0. The highest RAM address on the particular MCU used in this example (Black Pill STM32F411) is 0x2001ffff, so the stack at this point have used about 15 bytes. Any value after that (remember the stack grow down, so lower address) will be unused at this point. If we create a pointer like this:

we can store a "known" value at that location, reset the MCU and then check that value immediately at startup.

Our initial code shown earlier can now be expanded like this:

In this case, if a button connected to BTN_Pin is pressed for more than 1 second, the device will reboot in bootloader mode.

Now, I am fully aware that messing with the stack like I do in this example is quite naughty. The question is, is there any way this could go wrong. Well, the answer is a "yes" but unlikely. If we look at the point where we do mess with the stack, it looks like this:

I guess that if a interrupt happened between setting the bootloader flag and calling the reset something unexpected could happen. Also a possible issue would be if the HAL_NVIC_SystemReset function call pushed the return address pushed to the stack would be at the exact offset location. This might require a bit more analysis.

The source for this example can be found on our github.